France is of course renowned for its gastronomy and in Provence one of the  most famous dishes is the Bouillabaisse, originating from Marseille.
We ate at one of our favourite restaurants (in the world!) this week , which  specialises in this great dish.
A table of 18 men, (French of course) arrived for the second sitting, having pre ordered the Bouillabaisse 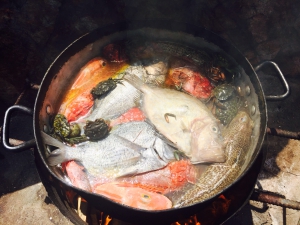 Bouillabaisse is a traditional fish stew and  was originally made by Marseille fishermen using the bony rock fish, which they were unable to sell to restaurants or markets. There are at least three kinds of fish in a traditional bouillabaisse: amongst these are red rascasse, sea bream, turbot, monkfish and hake . It usually also includes shellfish and other seafood such as sea urchins, mussels and velvet and spider crab.

You can see in my picture the broth coming to the boil cooking the fish perfectly. Saffron potatoes are simmered together with the broth and served with the fish. 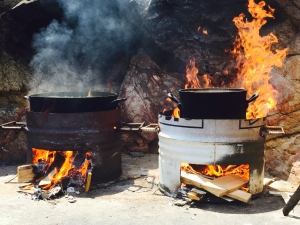 Cooking methods here are basic and traditional, but highly effective!

The broth is traditionally served with a rouille, a mayonnaise made of olive oil, garlic, saffron and cayenne pepper, served with grilled slices of bread. 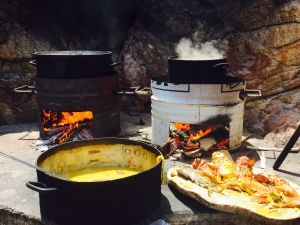 What makes a bouillabaisse different from other fish soups is the selection of Provençal herbs and spices in the broth; the use of bony local Mediterranean fish; the way the fish are added one at a time, and brought to a boil; and the method of serving. In Marseille, the broth is served first in a soup plate with slices of bread and rouille, then the fish is served separately on a large platter 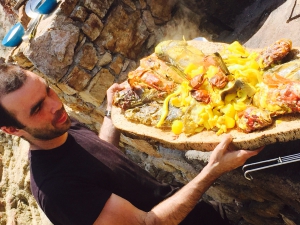 If you would like to know where you can experience this great dish e mail me for details.